Sugar addiction happens when people have uncontrollable cravings for sweet food. With this, they tend to consume a lot more food than what they would normally eat on a regular diet. This can lead to adverse health conditions like diabetes and obesity.

If you’d like to know more about what sugar addiction can do to the body, here are some facts about it.

Both sugar and the illegal drug cocaine act on the same region in the brain. For some people, they can build tolerance to sugar, making them crave for more of it. Unhealthy habits then form, much like what happens when people get addicted to cocaine.

On average, people in the US take in about 17 teaspoons of sugar per day. Also, a lot of what they take is known as added sugar, which is not a natural component of most food. Studies have found out that from 2003 to 2010, about 14% of people’s total daily calories are from added sugars. This is more than the recommended intake of added sugars, which is only up to 10%.

Moreover, the American Heart Association advises taking only 6 teaspoons of sugar each day for women and 9 teaspoons for men. For children, they recommend between 3 to 6 teaspoons daily. The average consumption in the US, though, is much more than these numbers.

All of these factors gave rise to a tenfold increase in type II diabetes in the last 30 years in America.

Sugar addiction has many causes 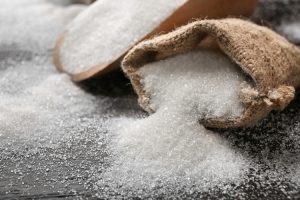 People do not get this addiction simply by eating lots of sweets. There are many factors, each with different levels of influence. They can be either physical or psychological.

One of them is depression. If people are not in a good mood, or if they are diagnosed with depression, they can turn to sugary food as a coping mechanism. Here’s why.

Eating sweets causes the brain to release more of a molecule called serotonin. This substance balances people’s moods, relieving the depressing feelings. This relief is what would drive them to consume even more sugar later on. As tolerance builds, addiction will develop sooner.

People who skip meals are also more vulnerable to this addiction. Skipping meals deprives the body of carbohydrates, which are its main energy sources. When the gut is left for a long time without food, the brain sends signals that cause sugar cravings. In time, those who skip meals regularly may unintentionally develop a sugar addiction.

Sleep deprivation is another factor that can lead to this addiction. If people don’t get enough sleep, it triggers an imbalance in hormones that control appetite. Two hormones are involved here, which are called ghrelin (the hunger hormone) and leptin (the full hormone). Lack of sleep increases ghrelin, at the same time reducing leptin. As a result, these people won’t feel as full even if they eat more. This tendency can then fuel the addiction.

Additionally, nutritional factors also lead to this addiction. For example, if people are deficient in some minerals, like magnesium, they would tend to crave more sugar-rich food and drinks. Also, having low levels of protein can reduce blood sugar levels, which would make people crave for sugar.

It is hard to tell the onset of a sugar addiction

Most people who suffer from this addiction are not aware of it. Even their friends and family might not know. Despite that, there are some common signs to watch out for, such as:

Knowing these signs early on would help individuals to control their sugar intake before the symptoms get worse. 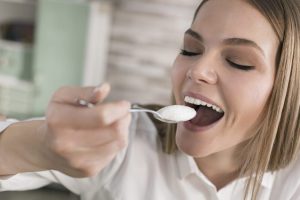 People who are addicted to sugar would experience several health issues. At first, these effects may be mild, but over time, they can be damaging. In extreme cases, they may even lead to death.

A common effect of this addiction is rapid weight gain. This is an effect that even non-addicted individuals face, as the excess calories cause their bodies to store more fats.

People with this addiction are also more at risk for heart disease. Studies have shown that eating too much sugar is linked to arteriosclerosis, or blockages in the arteries. Also, people who get 17-21% of their calories from added sugar have a 38% chance of developing heart problems.

Consuming a lot of sugar also triggers increased oil production as well as inflammation. In turn, these would lead to acne breakouts.

This addiction puts individuals at higher risks for cancer as well. Excess sugar affects the performance of white blood cells, which may contribute to cancer.

Compulsive sugar intake would also increase the level of blood sugar eventually. In turn, this would lead to diabetes.

People who consume food and drinks high in fructose may also risk developing fatty livers. When too much fructose accumulates in the liver, the sugar turns to fat, which damages the liver tissue.

Excess sugar may also have reactions with proteins, forming products that accelerate the aging process.

Sugar addiction could lead to depression

Dependence on sugar can certainly disrupt the moods of people. If they do not regulate their sugar intake, they are at greater risk of having depression later on.

Sugar addiction can be treated and prevented

A lot of things can be done to curb sugar addiction. Most of these methods do not even require individuals to go through rehab. Here are a few simple ways to overcome it.

People who are not yet addicted to sugar would also benefit a lot from these tips. This way, their sugar intake would be just right.